Returning To Work After The Conflict

I came back to Gaza last week for the first time since the summer’s seven-week conflict. After spending the conflict in the United States worried about my friends, colleagues, and entrepreneurs, I was not sure what to expect coming back to Gaza. I had heard their stories almost daily on Facebook, Twitter and Whatsapp.

What I found surprised me, even though I know how motivated and infectiously optimistic our entrepreneurs are. I walked into the co-working hub and found 35 youth working on their enterprises. Some were potential entrepreneurs who have started checking out books from our library & offered to lead a book club. Others were winners of our June Startup Weekend and have formed teams to make progress on their startups. “When will our incubation begin?” they asked me. I had not realized they would be ready to move forward so soon after the conflict.

Many of these entrepreneurs have lost their homes. Some look like they are still recovering from 6 weeks of very disrupted sleep. But they all want to move forward with their startups. Immediately.

I had just attended the annual Google for Entrepreneurs partners summit in Silicon Valley. The theme there was density: Google’s experts recommended that we create spaces which bring together a density of talent. I’m happy to say that has not been hard in Gaza. Our co-working space has become the hub for all young people in Gaza who want to use technology, build something positive, forge their own futures, and join the global startup movement. We have created a space for this community to convene and support each other.

We were visited today by Neal Keny-Guyer, the CEO of Mercy Corps, the organization that makes it possible for us to operate in Gaza. Thank you for your moral and practical support, Neal! 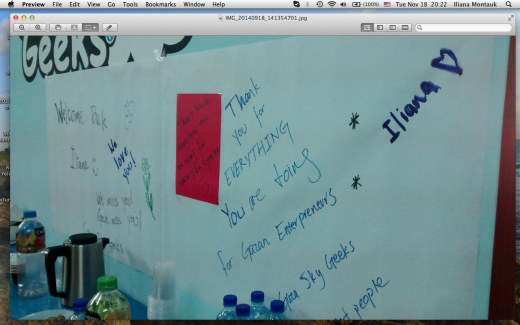